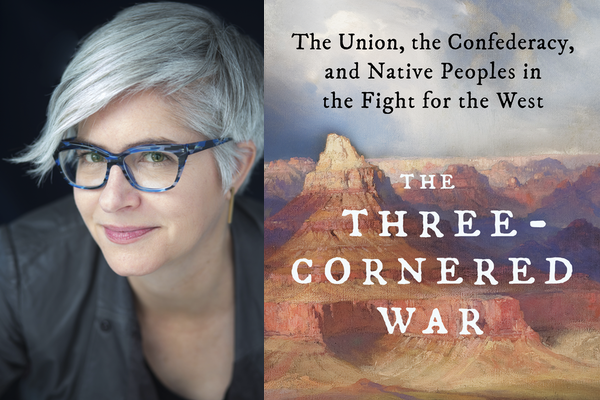 Remember the month of March? Yeah, me neither. It seems so long ago.

In the first part of the month, politics dominated the news. Elizabeth Warren was still in the hunt for the presidential nomination. Still, there remained some space in the pages of newspapers and in radio segments for stories about the important roles women have played in American culture. March, after all, is Women’s History Month.

In the middle of March, the spread of COVID-19 across the United States changed American lives in a profound way. Women and all of their visible and invisible labor are at the center of this crisis, and they are finding their way into news coverage of the pandemic. The stories of women living and suffering and dying throughout history, have largely fallen by the wayside.

Is this how women become lost to history? Does our focus on major, national events overwhelm and subsume them?

I began asking myself this question a few years ago, while I was doing research for The Three-Cornered War: The Union, the Confederacy, and Native Peoples in the Fight for the West (Scribner, 2020). One of the nine protagonists in the book is Louisa Hawkins Canby, who was married to the Union officer in command of the Department of New Mexico, Colonel E.R.S. Canby. While her husband was busy gathering troops along the Rio Grande to defend the Territory from a Confederate invasion in 1861-62, Louisa was in Santa Fe, stockpiling medical supplies and provisions for the war that she knew would come to New Mexico’s capital city. For me, Louisa Canby was a perfect person to narrate the experiences of civilians under fire in the book. She was a pivotal figure in this conflict, a woman who experienced the occupation of her city and nursed enemy soldiers in the aftermath of the Battle of Glorieta Pass.

In the course of my research on the Canbys, I discovered that they had a daughter. Mary Paul Canby first appears in the historical record in a list of Canby household members in the California census of 1850.[i] She was seven years old. E.R.S. Canby’s biographer says nothing more about Mary, noting only that she died as a child.[ii]

I believed this was likely true, as there was no mention of Mary in accounts of Louisa’s life in Santa Fe. This piece of information helped me understand why Louisa was attending séances in the city throughout the winter of 1861-62; she could have been trying to “reach” her dead daughter.

But when I visited the Filson Historical Society in Louisville to do research in the Canby Papers, I found several documents that put the lie to this biographer’s assumption—and also provoked more questions about who Mary Canby was, and what had happened to her.

A slip of paper, tucked into a file, written from a U.S. Army camp in California in 1849 bore these words: “Mary Jane Paul was born October 28th, 1844 at Plattsburg.”[iii] These were different dates and places of birth than the census record. A search of the muster records for E.R.S. Canby’s U.S. Army regiment revealed that an officer with the surname Paul served with Canby in California, and died there.[iv] Could the Canbys have taken an orphaned Mary in and adopted her as a baby? Or declared her as their ward?

The Filson also holds the Hawkins Family history, written by Louisa’s brother John. There is no mention of Mary in any of the chapters on the Canbys, or in the family tree. John, and many of the family friends, describe Louisa Canby as “childless.” This seemed to suggest that they did not consider Mary, whomever she might have been, as part of the family.[v]

Other letters in the collection suggested that Mary was still with the Canbys when they returned to D.C. from California, in the early 1850s. They sent her to board with a woman in Baltimore; the reason for this is unclear.

I found Mary again as a teenager, in the letters of a U.S. Army soldier who served with Canby in the Mormon War in 1857-8. There had been a snowstorm while the soldiers were moving their camp at Fort Bridger (Wyoming Territory), and the Canbys had taken refuge with him.

“Mrs. Canby and her Mary came to my tent, rejoiced that they had no farther to go,” Captain Jesse Gove wrote to his wife, “Mrs. Canby, Colonel, and Mary dined with me.”[vi]

These are not the words of people who considered Mary an outsider. And why would the Canbys take a ward with them, on such a dangerous journey on the Overland Trail, into a theater of war? Why not leave her with family or friends, as they had done before?

In the summer of 1859, Louisa’s unmarried sister Fanny traveled from Kentucky by herself to visit the Canbys at Fort Bridger. Her reasons for the trip are mysterious. The Overland Trail was not particularly safe during this period, and she came alone. By the time Fanny arrived, she was seriously ill, and Louisa spent much of the summer nursing her back to health. At around the same time, the family ceased to speak of Mary Canby in their letters. Did Fanny come to collect Mary and take her back to Kentucky? Or had she come to help her sister, who was mourning the death of her daughter?

When I was presenting my research to the archivists at the Filson, the historian LeeAnn Whites remarked, “There are two ways women disappear from the record in the nineteenth century. They die. Or they get married.”

Did Mary Canby get married? To someone unsuitable, perhaps? A common soldier, or a Mormon, maybe. Or one of the gamblers or itinerate merchants who frequented Fort Bridger. If she had brought shame on the family with such a match, it is possible that they would forsake her in all subsequent family records. Yet I could find no marriage records listing her name. And I could not turn to Louisa Canby’s journal or diary for clarity on this subject, because she never wrote one.

What happened to Mary Canby? It is impossible to know, unless there is a stash of Mary Canby’s letters sitting in an attic somewhere, as yet undiscovered.

Historians do not like not knowing things. We like an end to the story. But Mary’s story does not have a satisfying ending, and I can only speculate about where she was after the summer of 1859.

It is important that we keep speculating, however. Especially when we are trying to recover the stories of women and other marginalized people. If we give up and lapse into silence, their stories will never be told. Americans will keep thinking that women—especially “regular” women, who have done nothing particularly remarkable—have no histories.

If Mary Canby had the technologies that teenagers have today, she would have Instagrammed her trip to Utah, and complained on Snapchat about her parents dragging her along. Today we are lucky that so many women living through this current crisis have access to media and can write out their own histories in so many different ways.

But we need to keep asking questions about women like Mary Canby, no matter what month it is. We need to get at the real stuff of history, the lives that many people think don’t matter, lives that are often forgotten. Their experiences convey a much richer and more truthful sense of the past.

Baby Health in Winter Nearly a third of all coronavirus infections are in the United States, as the World Health Organization warns the pandemic is “far from over.” Follow DW for the latest. Global coronavirus cases top 3 million, with the World Health Organization warning the pandemic is “far from over” European countries outline plans...

Baby Health in Winter Loneliness Is Other People

Baby Health in Winter I’d never met Ian in person; we matched on a dating app in January, one week before he flew to China to start teaching cultural studies at a university in Hong Kong. We continued to message, and it was Ian who, on Valentine’s Day, first introduced me to the term social...