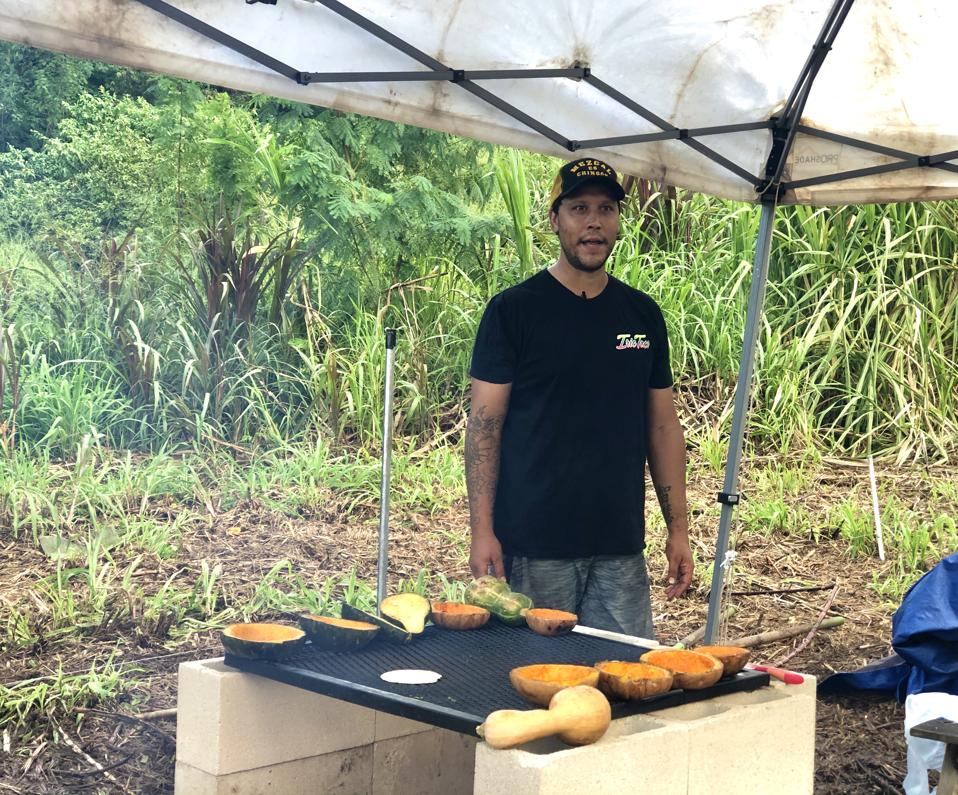 A whole, roasted pig greets guests as they navigate through mud and electric fencing to the dinner. A local vendor prepares tamales. Mesa presents a bowl of lard and fresh masa made from local corn and demonstrates how to roll, press and grill tortillas.

While hungry diners help out, Mesa whips up a batch of guacamole in a molcajete. His wife, Natalie Mesa, sets the table with homemade salsas starring chiles and tomatillos grown on their farm.

This is the first of many community-building and educational experiences that the Mesas plan to offer to their supporters in the coming years. It embodies the farm’s mission: connection.

“It’s always been about trying to reconnect people with food,” Bryan Mesa said. “Seeing what people resonate with. Initially, we started out in our backyard, and it was trying to get ingredients or grow ingredients that weren’t readily available in Hawaiʻi.”

He beams with pride as he shows guests what is growing on the farm. He lights up when they rave about how delicious the feast is. His giddy grin never leaves his face as he talks about preparing Mexican food from ingredients that he grew himself.

“That’s who I am,” he said. “That’s how I grew up. So, it’s something I always want, whether it’s corn or masa, to come home and have fresh tortillas. So, yeah, there will definitely always be, I think, a Latin influence in what I do just because it inspires me.”

This inspiration drives the Mesas to transform every challenge into an opportunity to keep growing their small business in a daunting industry.

Bryan Mesa is one of many farmers who struggle to keep their small farms relevant amidst the rise of factory farming. He and his wife know that, to compete with the lower prices that those farms can charge, they have to offer their customers more than a bag of vegetables. This means knowing not only how to grow food, but also how to be savvy businesspeople. With plans to break ground on new land in January, De La Mesa Farms models what is possible with ingenuity, patience and determination.

Bryan and Natalie Mesa gave birth twice in 2016: first to their son and second to a backyard microfarm. They used a $100 Amazon gift card that they had received for baby supplies to buy microgreen seeds, soil and trays. Mesa set them up, opened a stand at the farmers market, and bought more seeds with the profits. With that, De La Mesa Farms was born.

Bryan Mesa, born in Texas, lived most of his childhood in Michoacán, Mexico. He then moved to California, where he worked for his dad’s landscaping business as well as on several orchards and farms, eventually starting his own landscaping business. Twenty-five years later, he started his own farm.

Natalie Mesa, born in South Africa, moved at age 6 to California, where she grew up around farmers markets and in a household that loved to cook. After attending law school on Oʻahu, she started a nonprofit that provided pro bono legal services to entrepreneurs. Now a partner at Settle Meyer Law, she also undertakes all of the digital marketing for the farm, helps keep the books and update the business plan, ensures the company stays compliant with all laws and researches funding opportunities.

The couple initially started growing microgreens and ingredients important to Bryan Mesa’s Mexican heritage that were hard to find on Oʻahu, such as peppers and tomatoes. Quickly outgrowing their backyard, they enrolled in GoFarm, a University of Hawaiʻi program for new farmers. They now have a half-acre in Waimānalo, where their Latin offerings have expanded to include ingredients such as Oaxacan corn, chepiche and tomatillos.

But Bryan Mesa does not enjoy the luxury of getting to grow whatever he wants. He also must stay up with trends and must deliver what the market demands.

Farming is a business. Yes, it helps the environment, feeds people, and connects them with the land that they live on. But this all requires financial sustainability.

Slogans such as “farm-to-table” and “support local” may be all the rage these days, but they do not highlight how difficult it is to thrive as a small, local farm. Especially on islands such as Hawaiʻi, where land and supplies come at a premium. Costs also can be more volatile in farming than in many other industries.

As such, Bryan Mesa has to be a master troubleshooter. He must create an environment in which his crops can thrive and must trust that, if they do not, then he can find another solution.

He also has to expect that he could lose everything at any time due to weather or theft. For example, thieves recently stole more than a dozen third-generation pumpkins out of the ground that he had been developing for size, sweetness and creaminess.

After all this, the farm must compete against factory farms that can seduce customers with low prices at supermarkets.

The Mesas revise their business plan every six months to keep up with a fluctuating market and to apply for loans or other opportunities. They also are undergoing the process to make the farm certified organic, an application that requires detailed records of every aspect of production.

With all of this, it is a wonder that Bryan Mesa has any time to farm.

To generate success amidst these challenges, the Mesas employ a creative, driven and resourceful approach to business. Thanks to the couple’s ingenuity, they never once have had to invest their own money in the farm.

A business team from GoFarm audits De La Mesa Farms every six months. It then gives Bryan Mesa free consulting to help the farm keep its costs in line and hit its financial goals.

The business keeps growing by diversifying and staying relevant with trends. For example, the Mesas originally focused on value-added products such as fresh salsa. But when salsa was not popular enough to sustain the farm, they started concentrating more on microgreens production, which is now their most in-demand crop.

The Hawaiʻi Agriculture Foundation has invited Bryan Mesa as a guest on its EAT THINK DRINK panel. As an AgIncubatee for GoFarm, he provides consulting and support to new farmers. The Hawaiʻi Food & Wine Festival even paired him up with Los Angeles chef Ray Garcia from Broken Spanish restaurant this year to provide Garcia with a farm tour and ingredients for the dishes that he would be preparing for the event.

De La Mesa Farms also is exploring other streams of income, such as hemp and robotics.

The farm is getting its license to grow and to produce hemp. Not for CBD but for commercial-grade construction materials and compostable plastic.

The first step is figuring out which varieties will grow well in Hawaiʻi. Bryan Mesa bets that the islands’ year-round growing season will give them an advantage over mainland farms, which stop growing in the winter.

He intends to plant several varieties, to test each one, and to save seeds that do well to develop varieties that are productive in Hawaiʻi. If that goes well, then he either will hire engineers to help him turn the hemp into concrete – basically bricks made out of hemp – or will sell his seeds, whichever he deems more viable.

Bryan Mesa also has been working on automation.

“The future of farming is robotics,” he says.

He is working with an engineer now. Once they produce a design, he hopes to bring on a programmer. A company in Japan already has expressed interest in purchasing his automated microgreens farming system.

The Mesas plan to break ground on new land in Hawaiʻi Kai in January 2020 with the acre and $10,000 for startup costs that they won in 2018 in the Mahiʻai Scale-Up contest. They will take advantage of three years of free rent and two years of discounted rent to build their foundation.

It will take work in the beginning to test the soil, to assess potential pest problems, to analyze how water flows on the land, to determine which areas are best to grow on, to plant cover crops, to put nitrogen back into the soil to increase soil health, to build land perimeters, and to create a healthy ecosystem.

Production will be their priority for year one. They will focus on quick-growing, high-yield crops such as microgreens to boost wholesale revenue. They hope to achieve their first harvest in six m

Baby Health in Winter Welcome to Money Diaries, where we’re tackling what might be the last taboo facing modern working women: money. We’re asking millennials how they spend their hard-earned money during a seven-day period — and we’re tracking every last dollar. Attention, Canadians! We’re featuring Money Diaries from across Canada on a regular basis, and we...

Baby Health in Winter Draw, sculpt, paint, and shop all day long in the good company of artists, drag queens, and local bands at Drawing Jam on Saturday. Courtesy of Gage Academy of Art Our music critics have already chosen the 38 best music shows this week, but now it’s our arts & culture critics’...